A downloadable tool for Windows, macOS, Linux, and Android

Creating scrolling backgrounds made much easier and WAY FASTER!

On June 24th 2020 a user by the name of "Red-Halo" on the Aseprite Discord was in search for a way to animate scrolling backgrounds in a much faster way. I saw this comment and thought this feature could be very beneficial to the community. So naturally I rolled up my sleeves and got to work.

This toolbar started out quite small but has evolved exponentially. Due to this reason I decided that this needed to be its own separate toolbar apart from my main "Carbs Toolbar".

Minimize To Reduce Its Presence When Not In Use

Each layer can be set to a separate speed. Useful for layers that are farther away!

Each layer can be set to animate in a separate direction!

Animations Are Inserted At Cel Selection

This allows animations to have other frames that are not animated. Also allows you to produce a pause like effect.

Here Are Some Fun Examples:

As You Can See This Is Quite Fun To Play With :D

I can't wait to see your scrolling backgrounds!

Check the link in the info section on how to share :D

Currently the toolbar scrolls the entire canvas in the selected cel. Hope to add a selection option in a future update where it will only scroll a set selection of the cel :)

Hopefully the links in the thank you section are working in the mac and linux version. I am unable to test these versions so let me know if they are broken for some reason or if they are working correctly! Thanks guys!

One more great script from you. Thank you very much. I tried this script in Asperite for Linux (on Debian GNU/Linux) and everything works fine. Links in the "Thank You" section are working too. They correctly open in the default browser after clicking a button "Allow Execute Access".

Awesome! Glad to hear everything is working as planned  :) I do wish I could test these things out but its good that you were able to try it out and make sure :D So thank you for confirming this! Its quite helpful especially for future development as I know it will be working :)

And you are quite welcome! Its pretty great that I'm able to make something quite useful for the community :)

I tested the script on Debian. The most common and popular Linux distributive is Ubuntu. Ubuntu is based on Debian. So in most cases this should work without problems. Some distributives may have some specific dependencies but this is a rare case. Thanks again for the script. Parallax animations created by your script look amazing and fantastically easy to make. It can save hundreds of hours.

Heck yeah! Thanks again for testing that :) would def love to see your scrolling backgrounds!! Its really fun to play with haha

how do you use the bg scrolling effect inside of unity or game engines?

You could export the animation either as a gif or as a spritesheet if your wanting to use just this animation you've set up.

However in a game engine you might be better off just importing each layer and writing some code to handle this.

Its a bit complicated but I know in Godot there is an option in the texture to have it repeat which could be used some how.  I'm sure unity also has an option as well  but I've not used unity yet.

Also, another idea  I've seen before is a technique where you take the image and tween it to the left lets say and then spawn a copy all the way to the right off screen and keep that going which also moves to the left. Essentially while the one is moving off screen another is moving in to its place creating a loop effect.

I know there are probably atleast a couple handfuls of ways to do this though! :)

ok. and say no to godot. used it for 6 months not going back. I am used to using lot of other softwares besides godot. It don't support those export or don't have a plugin for it. And no m not wasting my time to make plugin for it. On the other hand unity has all plugins and works out of box. No crashes either. I got tired of godot T_T. So say no to godot aka GOAT! :P

Interesting I've actually had nothing but good experiences with Godot over the past couple years. Though I guess having experience in an engine is what you got to do to understand it more :) This is also why I don't poo poo unity because I haven't used it enough. I think they are both very great engines with tons of functionality. I agree sure Godot may be missing some stuff but thats the power of open source some one could make it happen :)

Out of curiosity what were you trying to import?  They have been adding alot of support lately :)

Either way I think once you find an engine its quite hard to swap to another. Atleast not as easily. Bit of a transition haha

This is why I'm glad we have choices we can all use what we want and in the end its all about what we make with them :)

Try making any 3rd party plugin for godot. An example would be making spriter animations work in godot or spine among many others.I have used 12 game engines so far. Keep coming back to unity. Unity is also annoying. Also 20x more resources for unity than any other engines combined. I am a fan of making my games finished or product released. So whatever tools makes it easier and have more solutions i tend to use it. Godot is awesome by itself and if u don't plan to use not many 3rd party software. Its mainly geared towards intermediate or expert programmer or hobbyists.

To each their own I guess :) Again this is why its nice that we have options :) People have different needs and preferences.  No harm in that :)

Personally I would rather figure things out my self then use a bunch of plugins especially when making games only because it gives you the freedom to do literally anything and your not restricted by what the plugin has to offer :)

But again that's just me I totally get that plugin make it easier to get the idea rolling but feel like using too many and relying on them could stunt your abilities especially when the plug in maybe stops working or something D:

I've actually heard great things of unity but often oven also seen people struggle with it too. Same can be said for godot. Sometimes the node system isn't for everyone. Again personally I find it quite intuitive :)

Works perfectly! Super pumped to see what will come from this. Thank you for the clear, concise directions in the info section. Sent a tip for it. Thank you again!

Thank you very much Xuriah! You are quite welcome, I tried my best to try and polish everything as much as I could :D I'm also hoping to make a little video on it showing off some cool techniques too!

Here is the little scene I might use for the video :3
Mountain Scene Night via CarbsCode Twitter

Thanks for sharing this wonderful addition aseprite!

Absolutely! Hope you have a great time with it! :D Let me know if you have any troubles. Also would love to see what you create with it! :D Very fun tool to play with hahaha 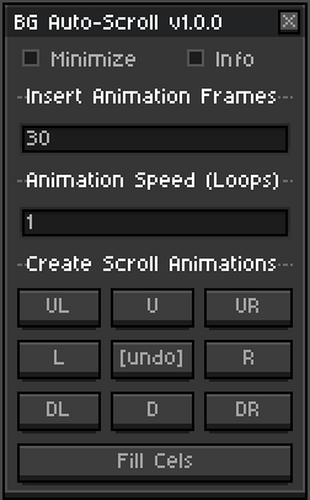